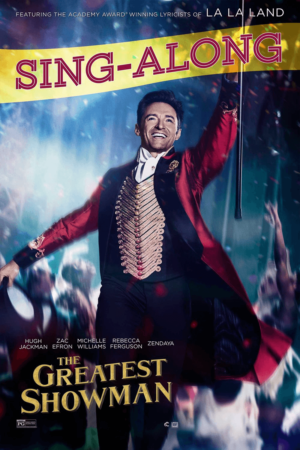 Hugh Jackman plays P.T. Barnum in The Greatest Showman, the 2017 musical celebration of the life of one of America’s true original entertainment pioneers, the producer of the most famous touring circus in history, and the spiritual godfather of marketing.

A worshipful celebration of the joy and equalizing power of showbusiness (and featuring songs by Benj Pasek and Justin Paul, who composed for that other big love letter to showbiz of the last decade, La La Land), The Greatest Showman presents a slightly sanitized-for-public-consumption version of Barnum’s history – but who better as a subject of a questionable biography than Barnum, who continually revised his own memoir to drum up publicity and force the public to buy new editions every few years? It’s pure delight, song and dance all the way through (and romance – Zac Efron plays Barnum’s playboy protégé, Zendaya is his trapeze-artist star, and their chemistry is incandescent). Just like Barnum would have wanted, audiences are transported into a fantasy of spectacle and music for 90+ minutes, and hopefully leave with a fuller appreciation for the magic in their own lives.